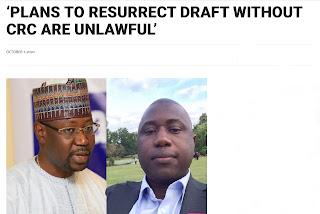 Rejoinder  –  ‘PLANS TO RESURRECT DRAFT WITHOUT CRC ARE UNLAWFUL’     By Pa Louis Sambou   Having read the above captioned article which was published in the  Standard Newspaper on 7 October 2020 , I thought it necessary to share my humble thoughts on the subject matter.    The above mentioned quoted Mr Mai Fatty as having said that:   “The CRC is the only legal entity that has the exclusive jurisdiction to review the 1997 Constitution and to draft a new one.  It remains relevant, and will not be set aside. Any deviation from this law by the State will be interpreted as the intention to create a custom-made draft from the desk of the Executive.”   I would humbly draw the attention of Mr Fatty to  section 22(1) of the CRC Act  which is what determines the extent of the CRC’s mandate. The implication of this provision is that the CRC “shall stand dissolved” one calendar month from the date the Promulgation Bill came to an end at the National Assembly. Therefore, as reaffirmed at paragr
Post a Comment
Read more

CIVIC EDUCATION | Comprehensive Report on The Gambia Draft Constitution 2020 and its Compatibility with Human Rights etc. 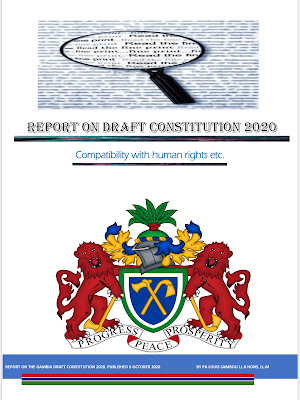 Introduction Purpose and objective of the Report   This unsolicited report is the result of a careful and thorough study of the provisions within the Draft Constitution (hereinafter “the Draft”), identifying those provisions whose substance are inconsistent with the Constitution, fundamental human rights and international treaties. The study which informed this report also sought to uncover and highlight the adversities such provisions present and offer sound recommendations for reasonable amendments by way of safeguards etc. in order to ensure compatibility and adequate protections. Whilst the issue of fundamental human rights is the primary focus of this report, Draft provisions relevant to good governance and the enhancement and entrenchment of democracy, democratic accountability and institutions were also carefully considered and reasonable recommendations for amendments and further enactments made in the same regard. This report’s objective is to compliment and consolidate the
Post a Comment
Read more

COLUMN | The CRC Press Conference: A Solemn Eulogy or, a Reluctant Validation? 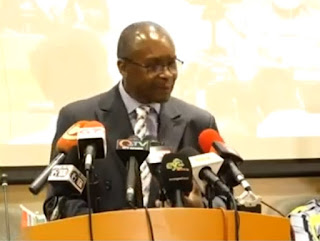 By Pa Louis Sambou    I must begin by lamenting the personal abuse Justice Jallow said they have been subjected; the subject-matter is indeed quite a highly charged one and, whilst emotions may flare up from time to time, I completely agree that such must not degenerate below acceptable boundaries of robust disagreement. Out of his 6,755 worded speech, this is about the only thing I find myself in agreement with — such is the level of disagreement as far as this  “constitutional reformist and reform pessimist” cum critic is concerned. I don’t know about others but, for this critic, the ‘label’ is well received.    I guess most would agree with me that a reasonable response to most set-backs in life begins with an acknowledgement of the misfortune. The verdict on the draft Constitution at the National Assembly two weeks ago was no small set-back but, it appears to be the case that, for the  Constitutional Review Commission  (CRC), it is as if the event never happened. The  draft Const
1 comment
Read more
More posts