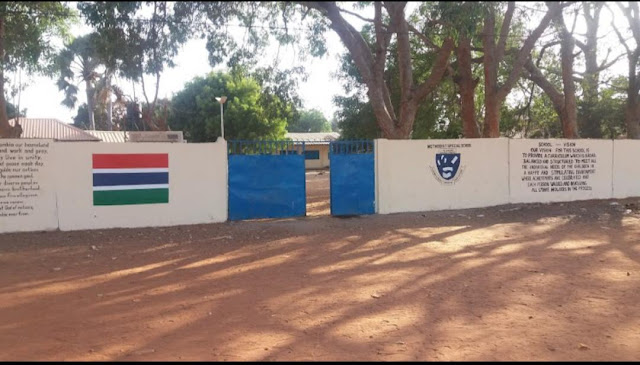 Mrs Lucy Sarfo, the Principal of Methodist Spacial School for differently able said the school has been facing transportation problems, adding that this has affected the education of students in the school.
This reporter was out and about to look into the plight of students with disabilities at Methodist Special School at Kanifing.
The Principal of the school, said the school was allocated with one school bus. This unfortunate situation she said, has hindered the educational careers of students.
“some of our students are on the waiting list due to transportation problems. We have only one vehicle to carry all the students to and fro; from school, so to reach out to every students in the country with only one vehicle becomes impossible especially those at Banjul and beyond, the only thing we can do is to put them on a waiting list and look for other means, that is to appeal to the government and also to some Good Samaritans for support so that the differently able persons in Banjul and beyond can access the school without hinderance” she remarked.
She added that most parents cannot afford transportation fares weekly for their children which leads to many children with Down syndrome, loitering around the streets begging, and selling which exposes them to all forms of abused.
Mrs Phebian Ina Grant Sagnic, Senior Nursing Officer at the Ministry of Health said, lot of children especially the differently able persons are the most vulnerable to abused in the homes and societies.
“I believe the differently able children are at higher risk of rape and other sexual abuses due to the lack of proper information. If all the students have access to education, that would widen their understanding about issues around them and of cause issues of abuse and sexual offences. There is need to provide them with necessary support” she posited.
According to her, parents have a role play for the well growth and upbringing of their children.
Mrs Phebian urged parents to create  dialogue on sexual and reproductive health education with their children.
“Parents do not talk to their children on issues relating to sex and sexual abuses. Parents should be mindful of their children welfare, most especially when a child reach the stage of puberty. When your child hits 15 and above, you will notice some body features changing; the enlargement of the breast, when this happens the next stage that follows is the menstrual circle, which is an important stage in a girls life.
I will advise parents when your children start producing such features, engage them directly into topics like how to take precautions before and when they see their menstruation, how to take care of themselves, how to prevent themselves from unwanted pregnancies and STI” she said.
She further discourages parents to avoid speaking to their children in parables on sex and reproductive related issues.
“rather communicate with your girl child in a clear language for a better understanding” she advised.
Addressing the discriminatory attitudes of parents towards their children with Down syndrome. Fatou Jammeh Vice President, Parents Teachers Association of the school said, parents should deviate from discriminating their differently able children.
“We the parents play a big role in the growth of our differently able children, giving certain privileges to the other children and isolating the differently able children, slow their growth and social interaction. All of them should be given equal rights and responsibilities, make them feel part of the society, teach them how to do their basic needs for themselves like; wearing their shoes, clothes, washing bowls etc all these will make them feel connected” said Fatou Jammeh.
Lack of inadequate learning equipments she said, has affected the education of students in the school.
She urges philanthropists' to support the school with school bus and electronic learning tools.
“These children are slow learners and we live in a modern world, and we want them to feel part of the world” she concluded.
News