COLUMN | A Nation Ripe for Change — Is a ‘TRRC Party’ the Silver Bullet? 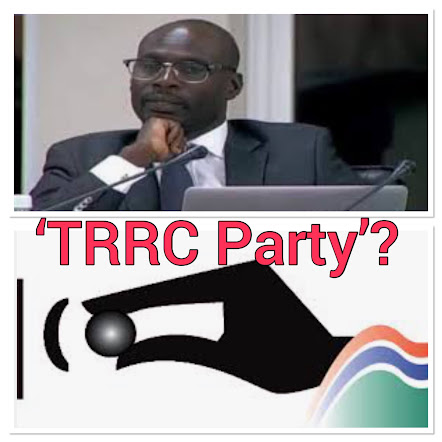 Since the disintegration of what was the Coalition, our political discourse largely revolved around the binary black and white worlds of President Barrow versus Lawyer Ousainou Darboe. Therefore, without taking any view either way as to the shines and dulls of either entity, it isn’t controversial to state that an effective third option will breed a breath of fresh air into the political atmosphere for a change. This is certainly not to imply that there aren’t other options besides the aforementioned, of course there are. However, in light of known facts, one just cannot reasonably conceive an effective third alternative out of any of those other options individually. This is not a pejorative assumption but rather a plausible and prejudice-free original premise of thought borne out from the available preliminary facts. Although these facts may change in the coming weeks and months but, for now, they are what they are.

Partisan citizens among us may no doubt disagree with the above summation and for reasons which may be perfectly legitimate and to which they’re absolutely entitled. Conversely, for the vast majority of citizens who by the way do not necessarily have strong (or any) partisan loyalties, the available choices unfortunately present something metaphorically reminiscent of the ironic tragedy of being presented the option of committing suicide at the fear of death. To present it in gentler terms, the diversity of the established political choices could be better —there exists a significant gap between the available menu options and the customers’ healthy dietary requirements.

I am not sure what the general public opinion is as regards the phenomenon of emerging Presidential aspirants but, it’s not uncommon to come across dissenting voices strongly railing against what is often lamented as the growing list of candidates. I would however be very interested to hear the arguments which underpin such dissenting line of reasoning on this subject. Until then, I am of the view that a reasonable starting position has to in principle, lean towards adopting a favourable view towards the phenomenon. Besides, it avails voters more choice and disrupts the culture of complacency among political players. What’s there to dislike about this shade of more democracy?

Now, the question as to whether an effective antidote to the existing poverty of informed democratic choices relies on the emergence of a ‘TRRC party’ (or a shade of the same) is one hell of a dragon to slay. For a start, the premise of the entire notion could for all we know only exist in myth, a shallow lane for which it is perhaps not very wise to dive into unless exceptional circumstances so dictate. Therefore, on this occasion, I am of the view that even if at a later date the ‘rumour’ is proved to be completely false, the public interest attributed to the subject matter is such that it is justifiable to engage the unverified reports to the effect that TRRC Lead Counsel Essa Faal is planning on running for the presidency come 4th December 2021. So accordingly, I’ll cautiously ride on the working assumption that, the notion is indeed grounded on some reasonable factual standing.

“A ‘TRRC Party’ with Western backing” was how Essa Faal’s rumoured candidature was described to me by folks who I suspect aren’t particularly enthusiastic about the prospects and accordingly setting out their stalls in anticipation — they (these and Faal) are definitely not on each other’s Christmas card lists. The label, “Western backing” is somewhat a very interesting choice of label which I must say caught my attention; whether or not its deployment is part of a strategic ploy designed to discredit the rumoured plans so that the egg is crushed and smothered even before it hatches, time will tell. This is of course with the proviso that such ‘egg’ does exist. So clearly, the road ahead isn’t as smooth as would otherwise be expected under normal circumstances in reliance upon which reasonable assumption it is safe to say that if the rumour is to be believed, candidate Faal’s successful bid to number 1 Marina Parade will rely on far much more than just taking on the incumbent. Because a candidate Faal will more likely than not be taking votes from existing opposition parties rather than the incumbent, he may in addition to opposition from traditional detractors find himself at the sharp end of political players and voters whom would have once upon a time had a very favourable view of him but as TRRC Lead Counsel, not the Presidential aspirant. These are of course not occupational hazards for which mitigation does not exist it has to be emphasised, however, mitigation will come at a cost: Walking back his stance re the TRRC in the case of his  traditional detractors or, hitching his political wagon onto an existing opposition party’s horse in the case of the latter occupational hazard. With regards to the former, Essa Faal is unlikely to have a ‘road-to-Damascus moment’ with Babili Mansa’s genes so, we can safely rule it out, outright. As for the latter mitigation, it is conceivable albeit not without its downsides i.e the risk of becoming an extension of another’s shadow in addition to walking oneself into political oblivion.

On the question as to what the motivation may be, there are those who hold the view that for Faal, running for the Presidency is incidental and it has always been his post TRRC plan whereas others opine that the political urge is, among other related matters, one which is being driven by a reasonable anticipation that the TRRC recommendations may not be implemented. Personally, I suspect it is more the latter than it is the former and in which case it is reasonable to assume that the political ambition basks on a vision which unless meaningfully transformative and fundamentally different from anything currently available on offer, I am not convinced it will be worthy of pursuit. The offer must be more than just the personality or just another diet of already available menu options.

Besides the platform upon which Faal may wish to pursue a political career and the substance of what his offer to the people should be, there’s the question of timing. Is December 2021 really the right time? However many upsides there may be to running in December 2021, these are significantly dwarfed by one mighty intrinsic downside being the extremely limited prospects of success given the obvious political realities. That said, considering all the circumstances, should Faal choose to run in December 2021 or, hitch his wagon onto any of the existing political horses, an undesirable outcome is not just a possibility but it is the expected outcome. To slightly extend on this point, there there are those who claim that his TRRC involvement should be a bar to him considering politics. I’m afraid there’s absolutely no merit whatsoever to this position — we should encourage our best and brightest to consider politics, not dissuade or attack them for doing so. Faal has the potential to be a very effective politician and if he’s considering it, I’d say yes go for it but, whether with a ‘TRRC Party’ or something else, December 2021 is most definitely not the right time.