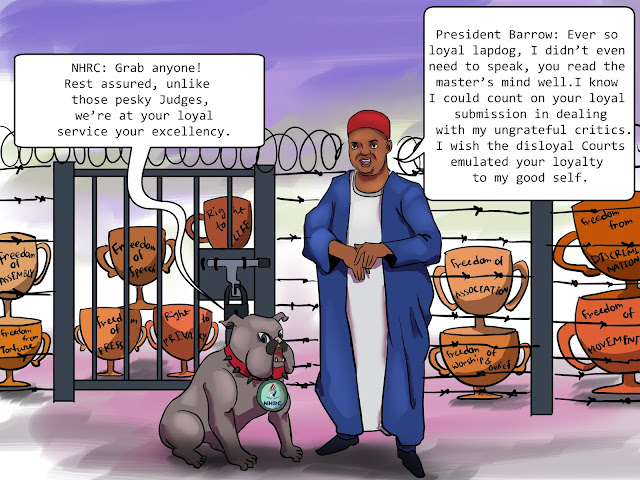 Continuous politicking is a permanent fixture in any democracy. Without such, there will be no democratic counterbalance to the incumbent, nor any mechanism through which the government of the day could be challenged and held accountable as is required under any respectable multi-party democratic framework. Effectively, what the President laments in his recent State House diatribe as ‘endless politicking’ is, a feature which is by all accounts a vitally essential pillar of Gambian multi-party democracy. The opposite is, the antithesis of democratic existence whose prevalence it seems the President aspires to doggedly pursue at some time in the very near future, never-mind the cringeworthy ‘clarifications’ and ‘re-clarifications’ (or perhaps Trump like alternative facts) advanced by his misplaced-loyalty-powered ‘politburo’. I note that most dismiss these as peak tosh by cranks, which characterisation is perhaps reaffirmed by the comical optics the affair projects. However, we’ll find that this is a costly self-abnegating mischaracterisation on our part. Here is the thing, the President and co. have got power at their disposal, therefore, we must take reckless things they say very seriously, no matter how infantile their substance. If you by any chance have a suspicion that the motivation of the President and co.’s unedifying lamentation is a sinister one, then you’re probably right because, even if the original vernacular publication was misunderstood and the quite frankly utterly ridiculous ‘re-clarifications’ on the West Coast Radio Coffee Time Show confusing, the final sentence in the subsequent press release, left very little room for any doubt at all.

The desperate efforts by the President’s spokesperson to reverse-engineer the words spoken by the President, so that a narrative is misleadingly propagated to conveniently marinade and re-present the issue as some reasonable offer of a ‘solution to insults’ rather than an explicit threat by the President, to curtail freedom of speech, freedom of assembly and freedom of association of people whom he deems to be his opponents did not go unnoticed. I did find myself questioning what I was hearing, listening to this reverse-engineered version of what the President actually said. As subsequent events reveal, I wasn’t the only one who found their sense of hearing colonised by what could only be described as a less than healthy dose of chaff. I would ordinarily unpack these but, on this occasion, please permit me to give this penance a pass as such an exercise would be as pointless as painting the grass green — the public already saw through the hollow attempt and accordingly conceived it for what it truly is. So, without dignifying this public disservice with an unworthy analysis, maybe it’s more deserving to expose its fallacy by revisiting the President’s spoken words themselves which in English translate as follows:

“Some people are politicking on a daily basis. It is endless politicking on the streets and on social media and communicating unpleasantries. However, come 4th of December, if I am declared the winner, I will bring these activities to a halt in The Gambia. Then on, instructions will be given to the Inspector General of Police to refuse all applications for permits to hold lawful assemblies because these activities are of no benefit to The Gambia”

Clearly, judging by the President’s spoken words, the sort of activities he has in mind and wish to “bring to a halt” are lawful activities for which a “permit” from the “Inspector General of Police” is required and nothing else to the contrary. But amazingly, the conveyor belt of outright absurd revisionism which continues to emerge from the wagons of unconventional ‘genius intellect and skill’  circling the President, seem to suggest that these, read the President’s lips in reverse order — evidence of which revisionism permeated the subsequent press release, which not only bore no semblance whatsoever to the subject matter it sought to address (rebut claims that the President threatened to curtail civil liberties) but, rather than rule out any of those things expressly threatened by the President in his State House diatribe, it extended those threats to include curtailment of lawful online activities for which no permit has ever been mandated, whether de-jure or de-facto. Not even under the 22 plus years of the Jammeh dictatorship. Yes, this is how far down the sewer the President threatens to submerge Gambian democracy.

This brings to mind a passing comment which emerged during a discussion on the subject, which had it that “…unlike his infamous uncoordinated ‘where were you?’ unpresidential episode, at least there was some method to this latest madness”. This is no credit I hasten to add; no prejudice intended whatsoever but, the office of the President comes with such honour which unfortunately, its current occupant is falling short holding himself up to. I of-course state this with grave reluctance.

Digressing back to the substantive issue though, if someone with access to firearms threatens to shoot you, one would be very foolish indeed not to conceive such as a credible threat. The salient point here being that, we mustn’t be under any illusions, the intention is crystal clear: repression and culling of opponents. This must be taken extremely seriously. The President must note that, whilst flirtation with dangerous reactionary ideas such as these may serve a short term political goal, such stands no chance whatsoever sustaining itself against the fast growing democratic system which it must completely tear down in order to survive. So, one wonders to what extent such self-inflicting reactionary adventure serves anyone any useful purpose other than institute a self-inflicted hinderance rather than any help. This is by no means a declaration of confidence in the ability of oversight institutions to deter such hostility at all, to the contrary, it’ll be such an irony to rely on a complicit rights watchdog (the NHRC) which has demonstrably shown an undeterred, delightful willingness to submit to and service the excess will and harmful desires of the Executive branch of the State.

For anyone who cares to give the remarks any audience, it is very clear that the belligerent shells are reminiscent of ones being quite literally launched from the barrel of a Jammeh-inspired cannon. Well, I hate to rain on the President’s parade but, I’ll break the obvious to him that it does not stand up to reason, to venture that an impersonator could master any art better than its innovator. If the playbook which he appears to be placing so much reliance on, so spectacularly failed to ring-fence Jammeh’s lifetime rule, reliance on it in 2021 to achieve whatsoever political endeavour is perhaps a bit of a masochistic exploration to put it ever so politely.

Unless the President and those around him have completely lost all grasp of reality, it ought to be evidently obvious to them that, the last incumbent who at such close proximity to elections exhibited similar “madness”, ended up harvesting his own head. A defeat which occurred, in spite of his self-professed ‘exceptional supernatural abilities’. So, reasonable logic would suggest that the upshot of following a similar path today would more likely than not, yield similar results which I am pretty sure would be beyond the ways-and-means of whatsoever ‘supernatural capabilities’ of whichsoever voodoo spin-master ‘astrologist’ happens to be on the State House ‘spiritual advisory’ payroll these days (if one exists that is).

All in all, the conduct under review is grossly off-putting and I’m pretty sure most would agree that this is even an understatement. One could imagine very few things emerging from State House since January 2017, which did so much to alienate so many middle-of-the-road, nonpartisan citizens who it has to be borne in mind constitute a very sizeable demographic. Effectively, if the belligerent ploy is one to pitch for votes, then it’s certainly not unreasonable to conclude that its architect  must have had an enigmatic suspense of commonsense. Since when has giving voters a bloody nose led to a ballot-rush in one’s favour? The President best see the wood for the trees or, face the prospect of being supinely (mis)advised into electoral humiliation and soon spun out of office.

In reality, there’s hardly anything on offer, which is good enough to draw in any enthusiastic continuity votes anyway. So, the obvious question which springs to mind is: Why make a bad situation any worse?