Ousainou Darboe explains the struggles of UDP ahead of Presidential election 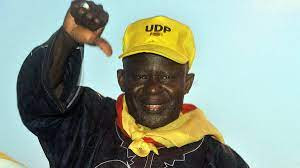 Ousainou ANM Darboe, the Presidential candidate for the United Democratic Party (UDP) has reminded Gambians of the struggles fought by the party during the repressive rule of former president Yahya Jammeh.

Lawyer Darboe described the struggles of the late martyrs of the party saying they fought to liberate the country from the brutal rule of former president Yahya Jammeh.

He made these remarks on Saturday 27 November 2021 at the “ALL KOMBO RALLY” held at Brikama, West Coast Region.

“Many of our members were captured here in Brikama. They tortured them and violated their right for no crime, only because they are supporting UDP” he decried.

The veteran human rights lawyer jogged the minds of thousands of supporters during the bitter struggles of the party. He called on supporters of the party to come out in full swing and vote for UDP.