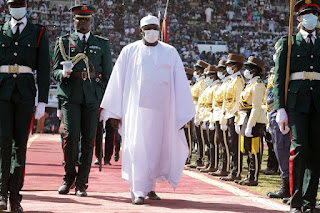 President Adama Barrow has renewed his government promises towards improving the economic status quo of the country.

He made these remarks yesterday at the Independent Stadium, as he was sworn into office for the next five years after his landslide victory in the December 4th presidential election.

The ceremony was attended by many African Head of States, government dignitaries and party supportes.

He said Gambian people entrusted him with another mandate to continue his development plans for the country.

He stated that in the next five years, his government will acccelerate the economic growth of the country.

“The focus now is centred on economic development” he said.

President Barrow praised his government for registering significant strides during his first five years into office.

“To cite examples, most of the construction works of the targeted eight hundred kilometre, Primary Road Network, and South Banks have been completed. My administration has constructed essentials bridges, totalling 2.3 kilometres in various parts of the country. These include the famous Senegambaia Bridge and the new ones in the Upper River Region” he bragged.

The vision strategy of the National Development Plan he said, will focus on key sectors of the country, for economic growth and youth empowrment.

“To boost the income genrating sectors and institution, such as tourism and fisheries. The potential for growth must be tapped optimally to support new development initiatives” he concluded.