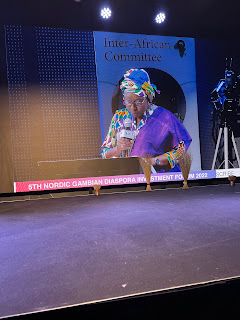 Established in 2011, the inter African Committee is an NGO organisation targeting people of African descent with different cultural background in Norway.

Readers could recalled that tens of thousands of Gambians left the country during the repressive rule of former President Yayha Jammeh.

The weeklong event brought together Gambians from the Nordic countries, and government dignitaries to devise strategies for the Gambian diaspora to effectively contribute towards the socio-economic development of the country.

“The Diaspora Directorate was established at the MOFA in January 2018. The raison d’etre of the Directorate is to promote, support and facilitate consultative engagement of the Gambian Diaspora in national development,” he said.

He added: “The Directorate is mandated to facilitate structured and optimal interface between the government and the Gambian diaspora and to be the lead agency for the implementation of the Diaspora Strategy which outlines the facilitation of Diaspora investment, creation of Diaspora Development Fund and to mainstream and maximize diaspora expertise for socio-economic development in the Gambia amongst other things,”he remarked.

Momodou Sabally, the founder of Sabally Leadership Academy lauded the formation of the Gambia Diaspora initiative. He further highlighted the significance contributions of the Gambian diaspora into the economy, saying there is need for the government to empower the Diaspora participation into the country's economy.

“This is a commendable move. The contributions of the Gambia diaspora into our economy is far more beneficial than the donor funding from the west. If we want our economy to grow faster, then the government of The Gambia needs to empower Gambians living in the diaspora,” he concluded.