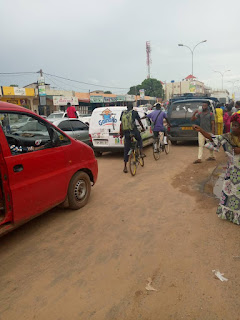 Passengers across the metropolitan areas of the Kanifing Municipal Council (KMC) have lamented their growing frustrations over the frequent traffic congestion in the country.

This negative trend have compelled many drivers to take a huge diversion, due to traffic congestion of vehicles in the highway.

This reporter was out and about in the metropolitan areas to look into the constraints of passengers, during traffic congestion.

Lamin Jammeh, a frequent traveller from Latrikunda Sabiji to Westfield said the wrong parking of vehicles along the highway, is the main factor of the traffic congestion.

The predicaments of the traffic congestion he said, normally resulted to shortages of vehicles in the morning.

“The habit of some drivers packing their vehicles along the road which obstruct the smooth movement of the traffic. Nearly all the workers goes to the same direction in the morning and in the evening is the same thing, so this causes shortages of vehicles for workers” he said

“At times from Farato to my work palace it takes me nearly an hour to get to the work place which is not good for me as a civil servant, because people need my service. Roads are too small, and also our drivers taking passengers without living the highway. They will be on the way, which is also another contributing factor,” he stressed.

Omar Ceesay, the President of Gambia Transport Union said the one lane traffic system, has been the main causes of the traffic congestion.