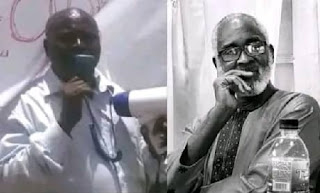 “Solo Sandeng: The Tiger, the Leopard and the Jaguar”

-The wheel of Gambian history was rusted and halted when the indomitable Tiger was captured and imprisoned illegally by the forces of brutality!

-His tragic but honourable heroic death is the spark which ignited the flames of revolutionary zeal and political veracity!

-He is the catalyst for positive but non violent social and political changes and an accomplished fighter against corruption and depravity!

-Solo Sandeng is a paragon of virtue,an epitome of righteousness and an icon of revolutionary tenacity.

-The entire universe is paying homage to Solo Sandeng the Tiger of the jungle of justice and political rationality.

-History will forever present his gallantry and bravery to the present generation and will accurately narrate his peerless valour to posterity.

-Solo Sandeng, may Allah forgive all your sins, overlook your shortcomings and multiply your reward for your relentless struggle for the liberation of humanity.

-May your family be strengthened with endurance, faith and confidence to be proud of your sacrifice in order to preserve your legacy.

Views expressed herein are those of the author, and do not necessarily represent the views of the publisher. Want to be a contributeing author?
Please email: opmail220@gmail.com